Pwas With Angular: Being Reliable

This article was written by Michael Solati. It covers a lot of details targetting javascript, angular, pwa, serviceworkers and various other things. Michael Solati is a tech enthusiast and creative writer and has been writing for a long time now. He has written around 18 posts here and has been a regular contributor to forum discussions. You can browse more details and other various blog posts and articles he has written on his personal website https://michaelsolati.com/.

If you've been in the world of web development during the past two years you've probably heard the term Progressive Web Apps (PWAs for short). PWAs are essentially web applications that provide a near-native experience on mobile devices. According to Google they must be:

So how can we make sure our Angular applications follow these tenets and provide the best user experiences?

Well let's take a simple app I've already written and turn it into a PWA.

Now that we have everything set up, lets run our application npm run start:pwa, open up Chrome and go to localhost:8080 and see what it does. 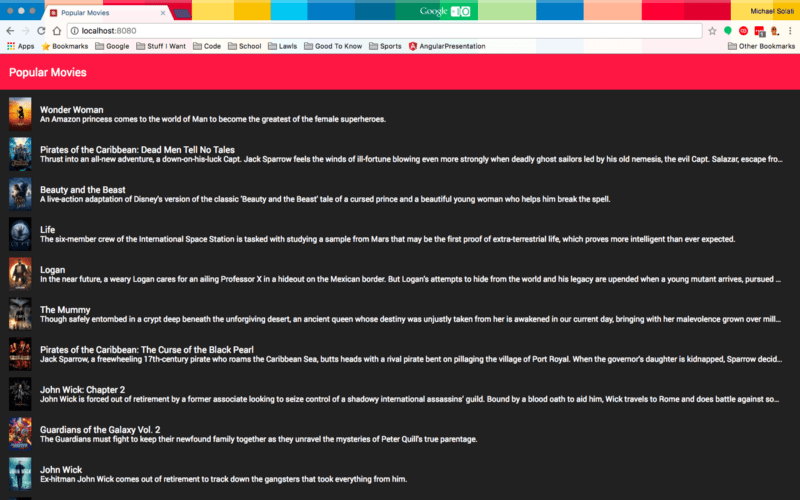 Well it runs, and if you click on a movie we can get more details about it. AWESOME! But what happens when we're offline?

Hmm… that’s not that good. If there was a test for PWAs that would definitely fail it…

Wait a sec! There is a test for PWAs! Google provides an extension for Chrome called Lighthouse (install it!) that will run a barrage of tests against our application and will generate a report on how well the app did. And, as I expected, this app failed hard. 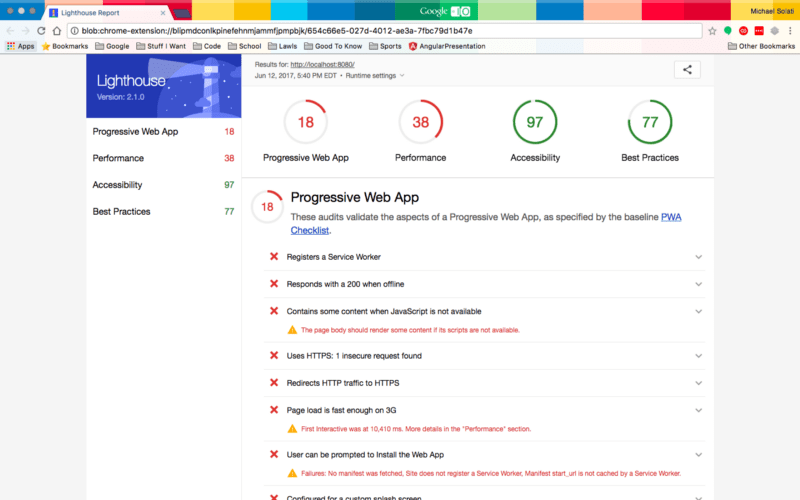 We can do better than this, so lets make this app more reliable!

The first thing we can do to address a lot of these issues is to use a Service Worker. A Service Worker enables our PWA to load instantly, regardless of the network state. It sits as a proxy between our application and the outside world, and puts us in control of the cache and how to respond to resource requests. Our Service Worker allows us to cache essential resources to cut down on our dependence on the network, giving an instant and reliable experience for your users even when there is no internet.

Now the Angular team actually provides us with an easy tool to add a Service Worker as well as another set of tool (we'll get into them later), so let's install our tools with the following.

That was easy, but we will also need to update our .angular-cli.json to tell it we want to include a Service Worker. That way, every time we make a production build, it will include our Service Worker.

Now if we run a production build ng build --prod and check our dist/ folder, we'll see a file called ngsw-manifest.json and if we look into it we will see all of our assets that will be cached by our Service Worker.

But this doesn't include our routing configuration, so we can create one with the ngu-sw-manifest tool (part of ng-pwa-tools we installed before).

Our ngu-sw-manifest tool isn't able to traverse through our application when there are relative paths for our component's templates and stylesheets. So we'll add moduleId: module.id to the @Component decorator of our three components. (src/app/app.component.ts, src/app/home/home.component.ts, and src/app/movie/movie.component.ts) So we should have decorators that look like this.

And if we run the failed ngu-sw-manifest command again we should see:

We're going to work with the above object in a bit, but first in our src/ directory we're going to create a ngsw-manifest.json file and fill it like so.

This sets our default caching strategy. (Modify the dynamic.groups[0].name and dynamic.groups[0].urls based on how you plan on hosting your app) Just remove the comments included, and now we can run the ngu-sw-manifest tool to take our assets, routing, and our custom defined manifest file and output it into our dist/ngsw-manifest.json.

So now we're quickly going to update our npm scripts to the following:

Then we can run our app npm run start:pwa. Try running the application after disabling the network connection in the Chrome Dev Console, heck we can even run Lighthouse on it again! 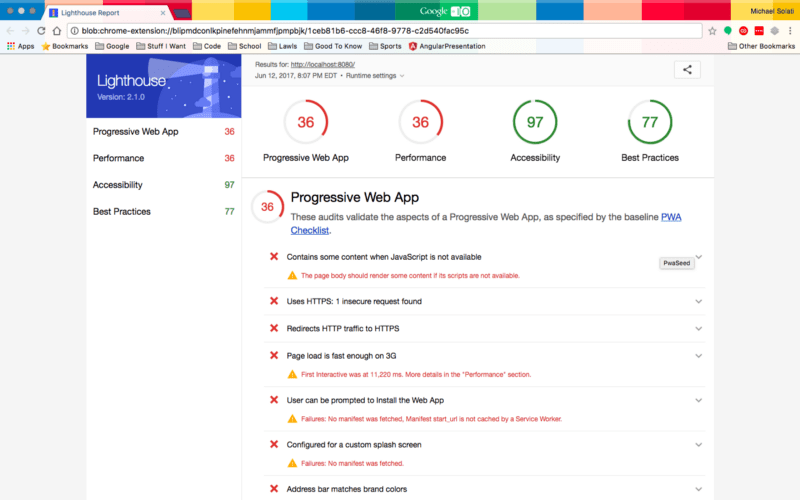 So we're doing a little bit better (some things like the HTTPS we wouldn't be able to fix until we deployed this). But at least we've doubled that PWA score! Next week we're going to up that score by improving our speed (perceived and real).

To look at the code differences from where we started to right now click here. Also if you feel so inclined, I invite you to deploy up your app to Firebase. If you run Lighthouse on the deployed app you'll get a much higher score: 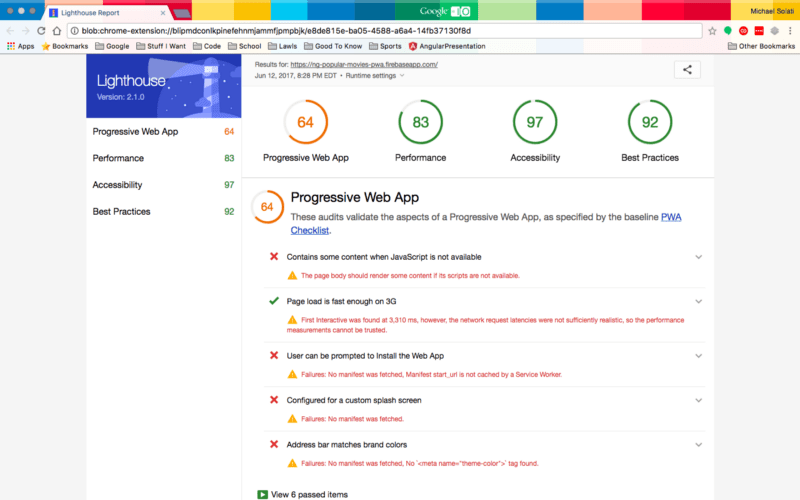 Developer 🥑 Find more about me on my website https://michaelsolati.com/

Notification A second ago